Realization of a 90's dream

Hey everyone! This is my first blog post so I feel something of an introduction is in order. I'm Ejay but you already know that, I'm a recent graduate of Rocky Mountain College of Art & Design here in beautiful Colorado. I went back to school after a LONG layoff because after years of freelancing as a comic book artist I was kinda burnt out and just done with the medium, and 3D animations and video games I had been playing at the time really intrigued me. So I enrolled in the school's game art program and off I went. During my first semester I found myself gravitating more towards 3D animation as I saw the greater potential for storytelling there, and as a comic artist I was all about telling the story. So I switched majors to 3D animation and really began to focus on modeling since I fell in love with Zbrush (once I managed to get a grasp of the interface!) and really wanted to translate my 2D skills to 3D.

Then something switched in me and modeling was ALL I wanted to do, I didn't care about story as much anymore as I wanted to make these really cool looking figures. But my school didn't have a modeling for collectibles course so I was left to kind of figure out how to proceed on my own. In my last semester we were finally offered a course on traditional sculpting with clay and working with my hands not only opened my eyes up to what I could do digitally, and reinforced my desire to create these lasting figures that I could enjoy pretty much forever. So I bought the few (and by few I mean two) books on the subject, Pop Sculpture by Tim Bruckner, Zach Oat and Ruben Procopio and Babes, Beasts and Brawn: Sculpture of the Fantastic by Steve Kiwus, and with the additional help of numerous YouTube videos I began to teach myself what I couldn't learn in school. But what would I sculpt? I could pick from any number of pop culture icons like I had been doing but I didn't feel connected to them so I had no passion to create them. Then as I was reorganizing my studio one day I came across a bunch of work I created as a teen and what stuck out to me were these X-Men/Avengers ripoffs I had created and I instantly knew what I would be sculpting. But these were really dated looking 90's designs so maybe I should update the designs first, then create them as models. But the teenager in me wouldn't recognize them so I decided the designs would not change at all.

I didn't want to just make another statue though, I had done quite a few of those already, I needed a new challenge and as I looked around a studio loaded with statues and action figures it was obvious what I would try. So what I present to you know is my current WIP action figure sculpt, The Dark Star (its a corny name, I get it, but it was the 90's).

Here is "concept art" that I worked from, since there were no turnarounds I had to flesh him out as best as I'd remembered him. 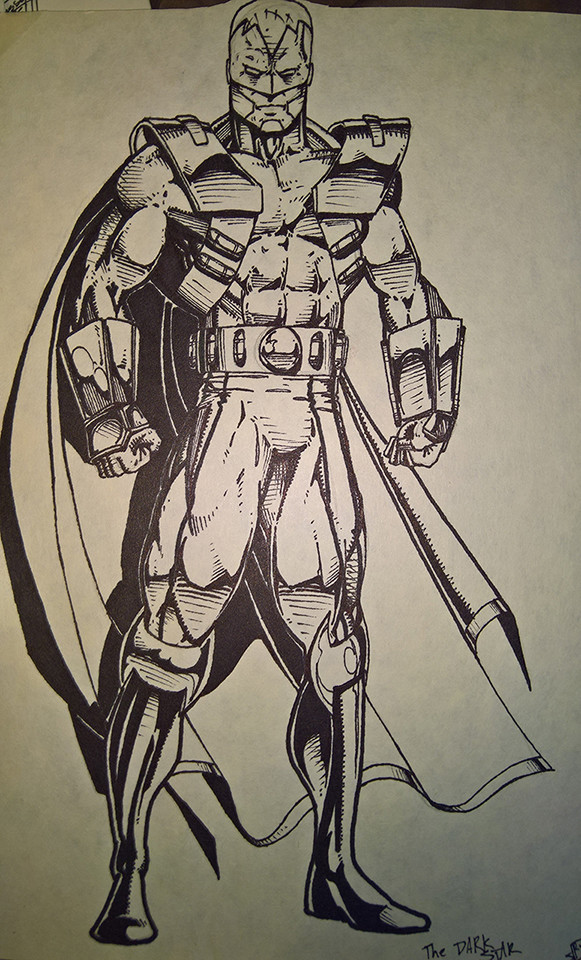 Like I said, sooo 90's. Don't dwell on the piss poor anatomy, just marvel at all that wannabe Jim Lee-ness!

So I grabbed one of my ready made base meshes, dynameshed him and prepared to get busy. 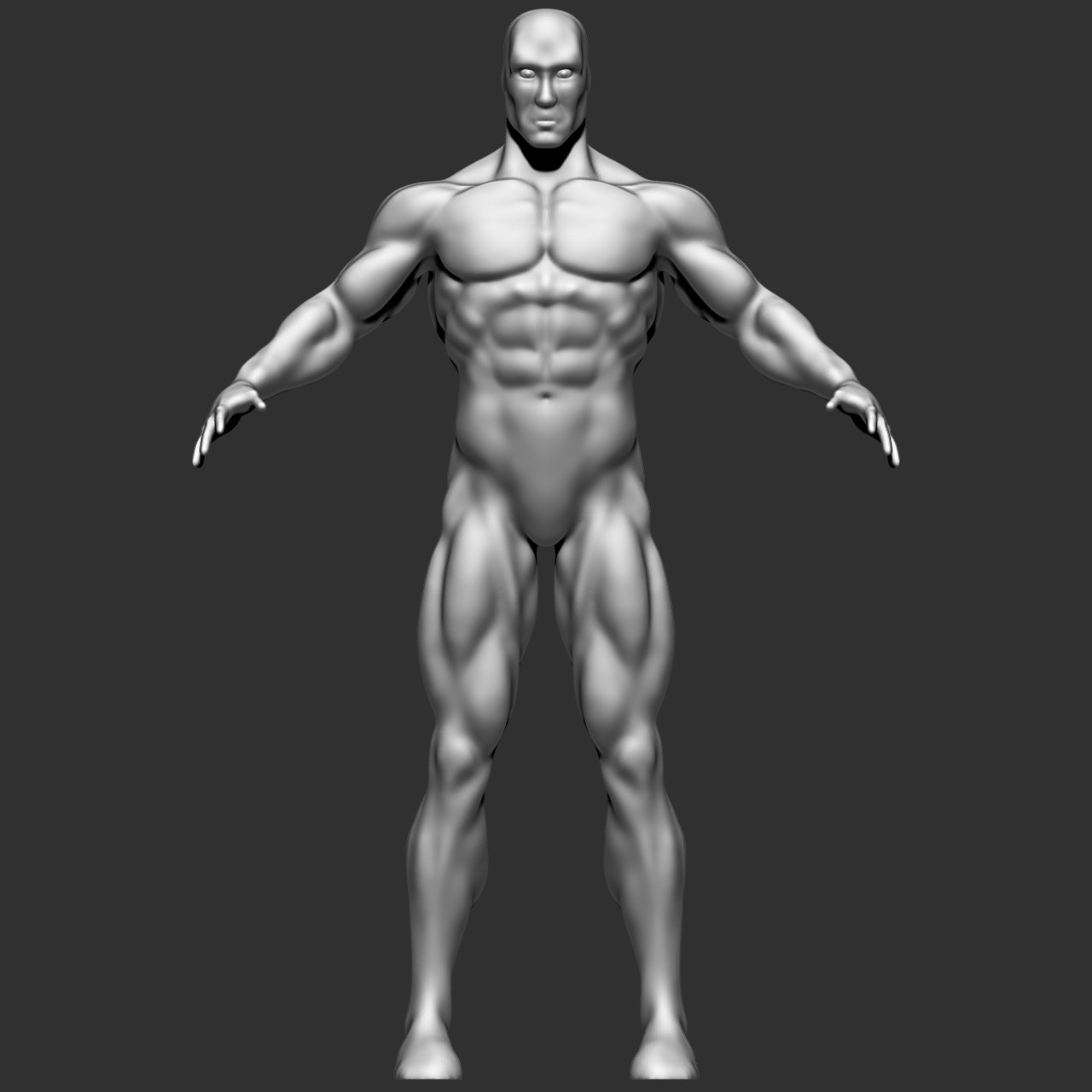 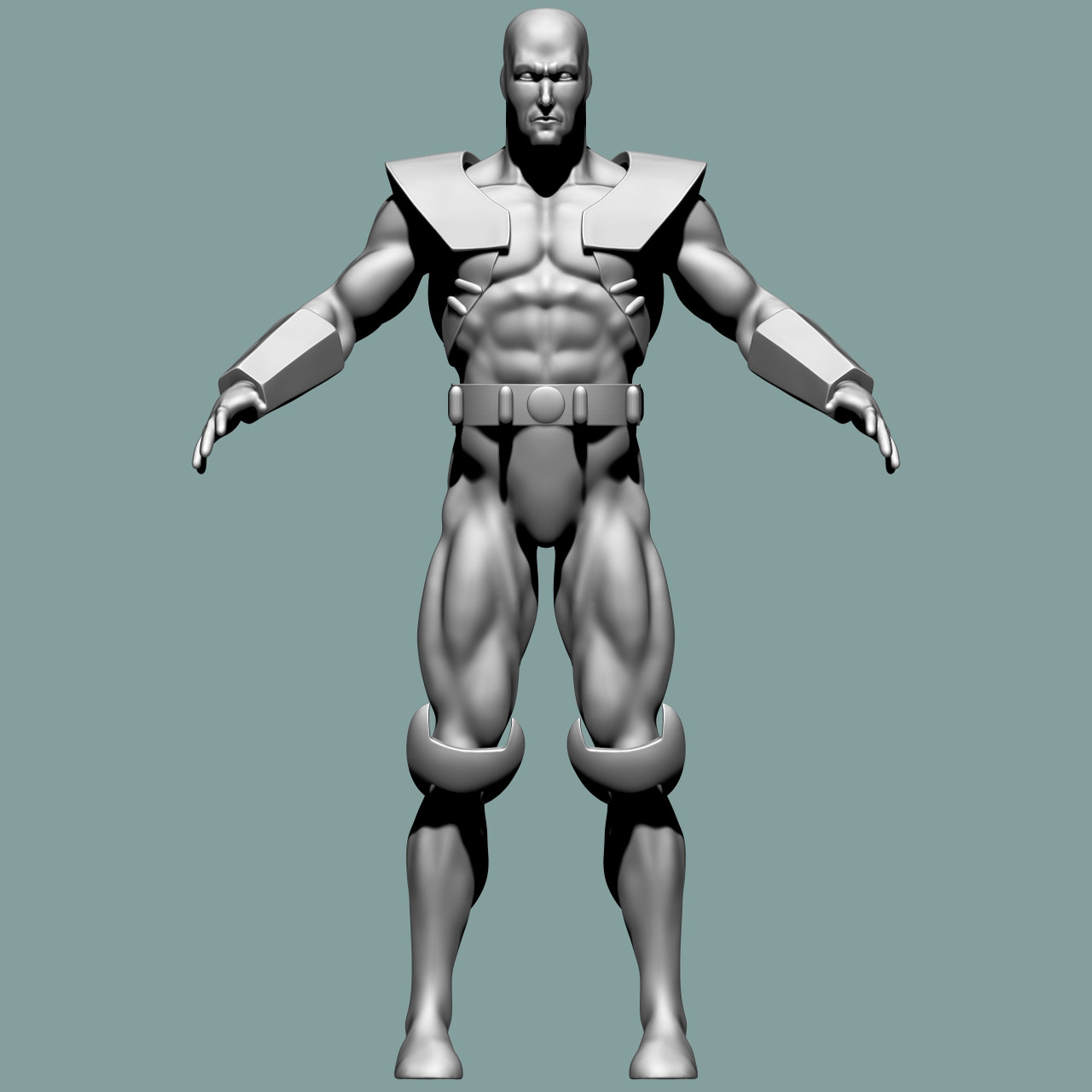 First thing I always do is change the background so my model doesn't blend into it, then add placeholders for all the accessories like the shoulder pads, gauntlets, etc. 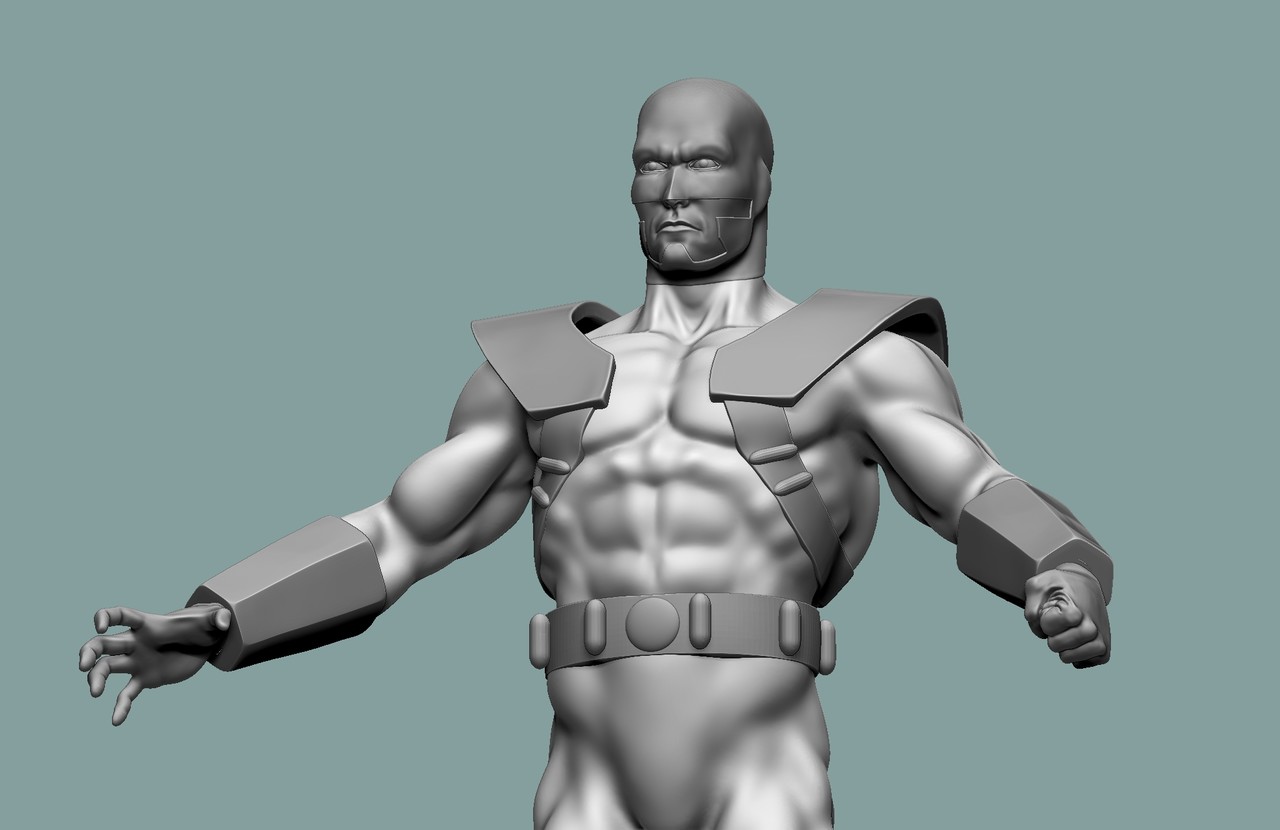 I then masked and split off the head, mask and replaced the hands. Since his abilities include force projection there's one hand for that and one hand good ol' punchin' stuff. 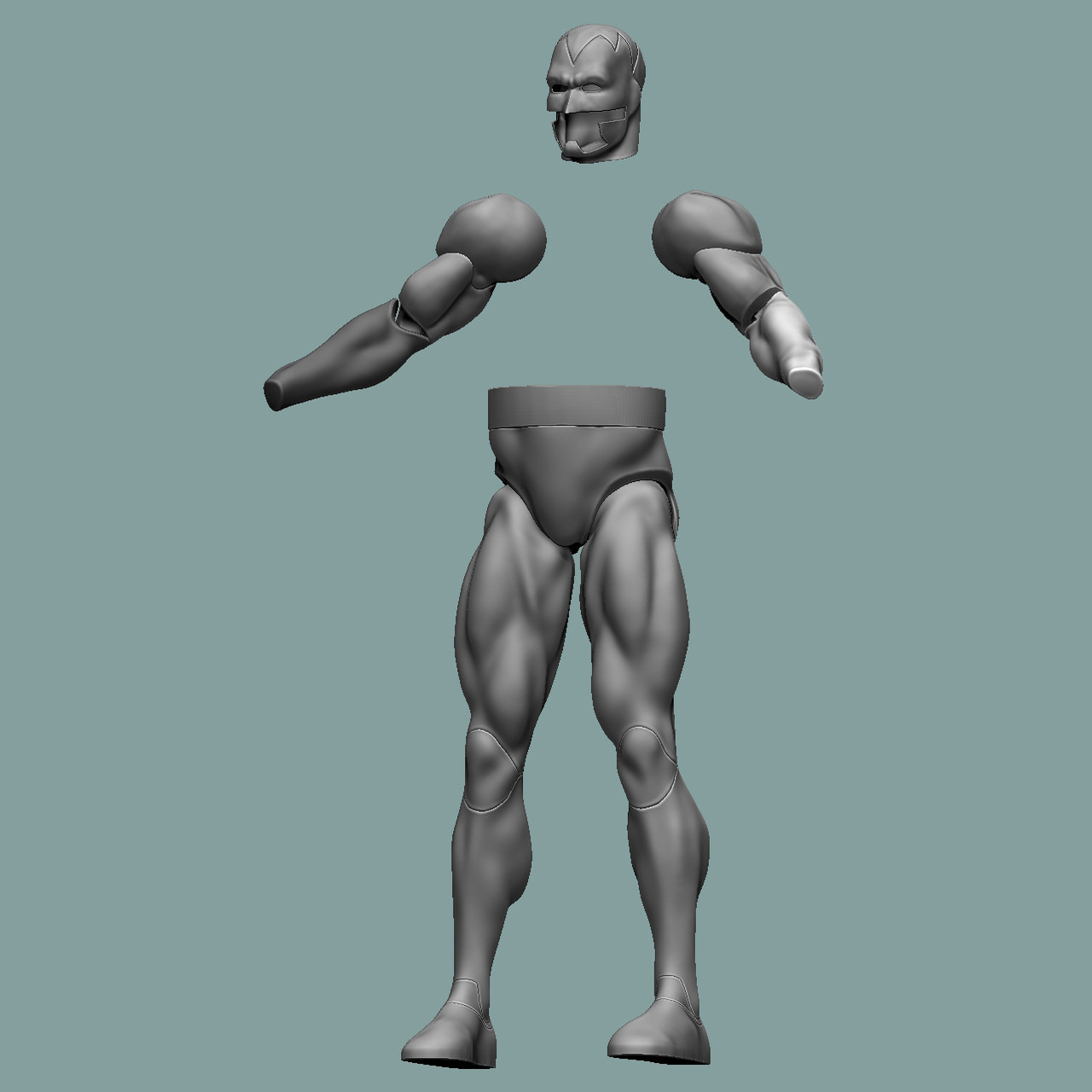 More splitting of the limbs and planning of future cuts. I also cut out the 'fleshy' parts of the face as a separate subtool so that it'd be easier to polypaint later. 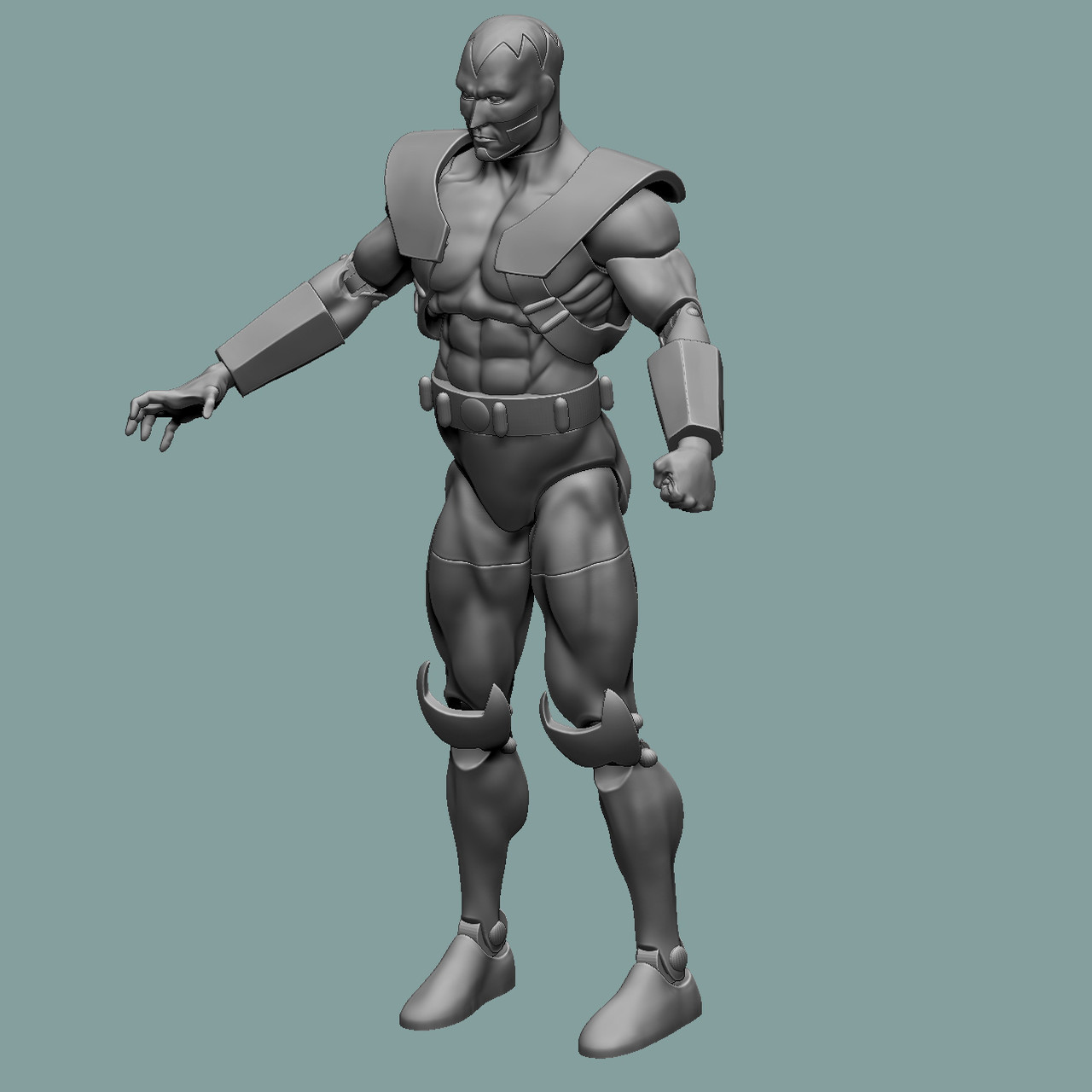 My first pass at adding the joints in. The joints I created in Maya since I wanted them to be as geometrically perfect as possible. I also added a cut to the upper thigh to allow the maximum amount of articulation possible. For reference I used a combination of Marvel Legends figures and various figures from McFarlane Toys. 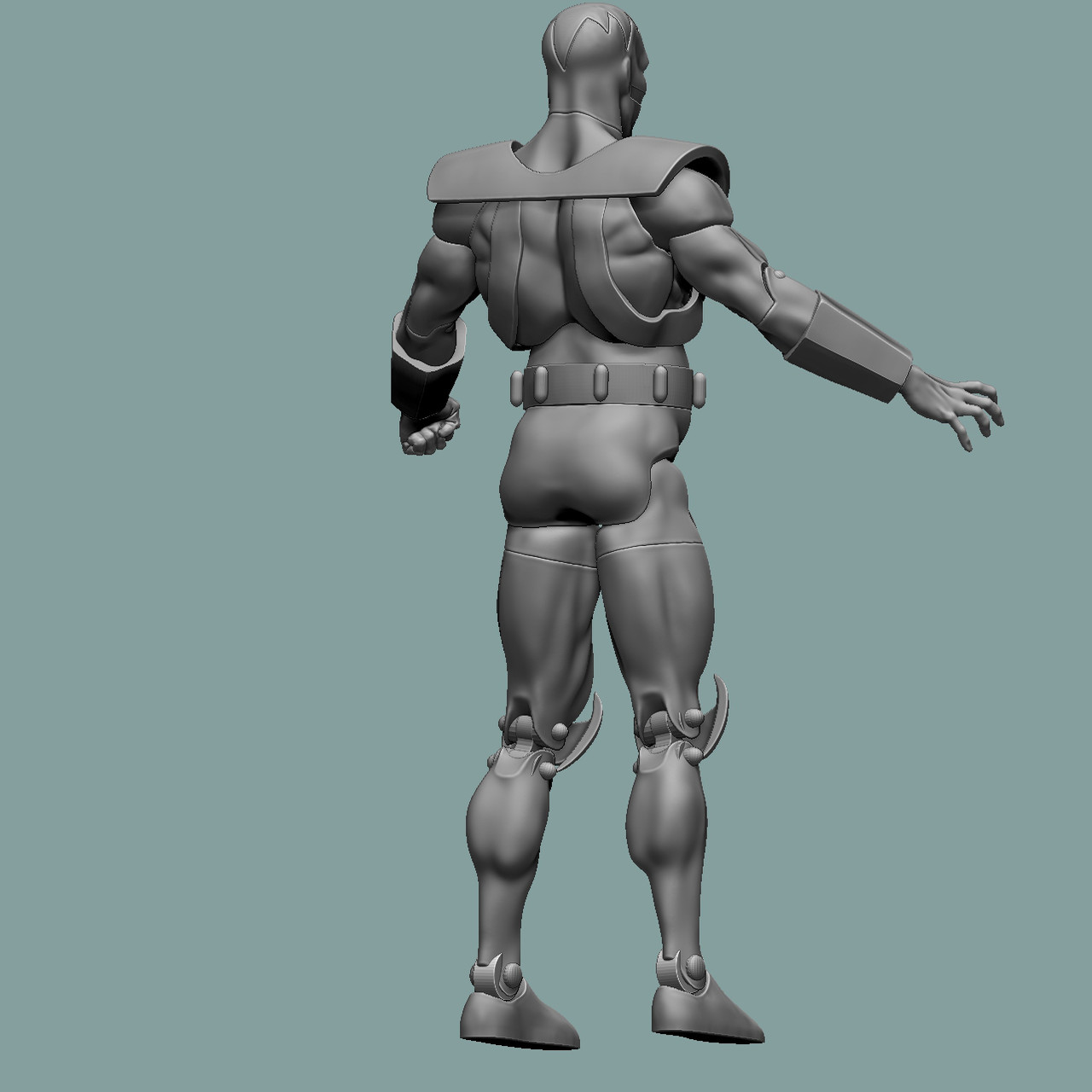 Just another shot of the inserted joints and pins. 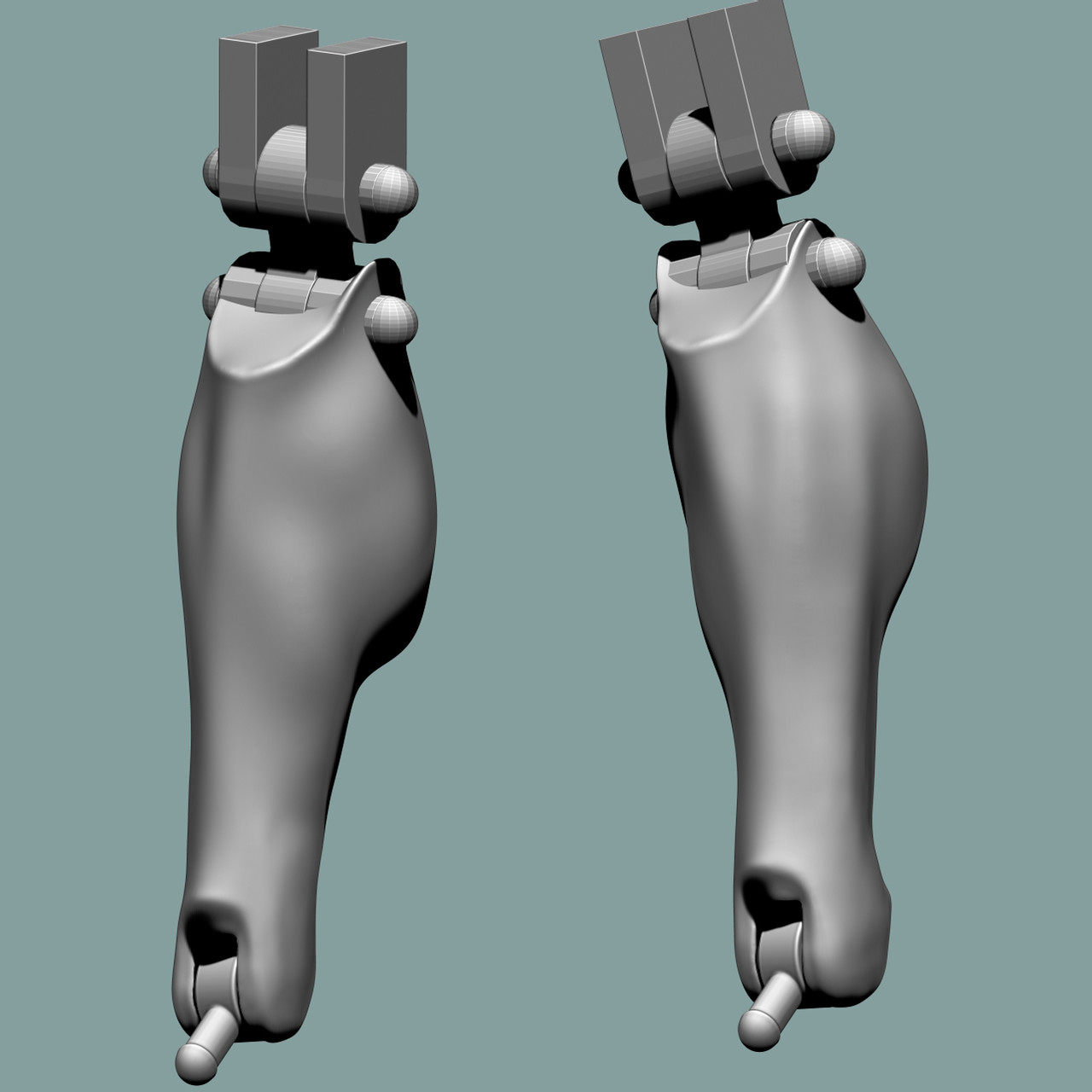 Double hinged knee joints allows the figure to kneel all the way. I then swapped the ankle joints out for a joint I found in my Bandai Sprukit Arkham Batman figure. 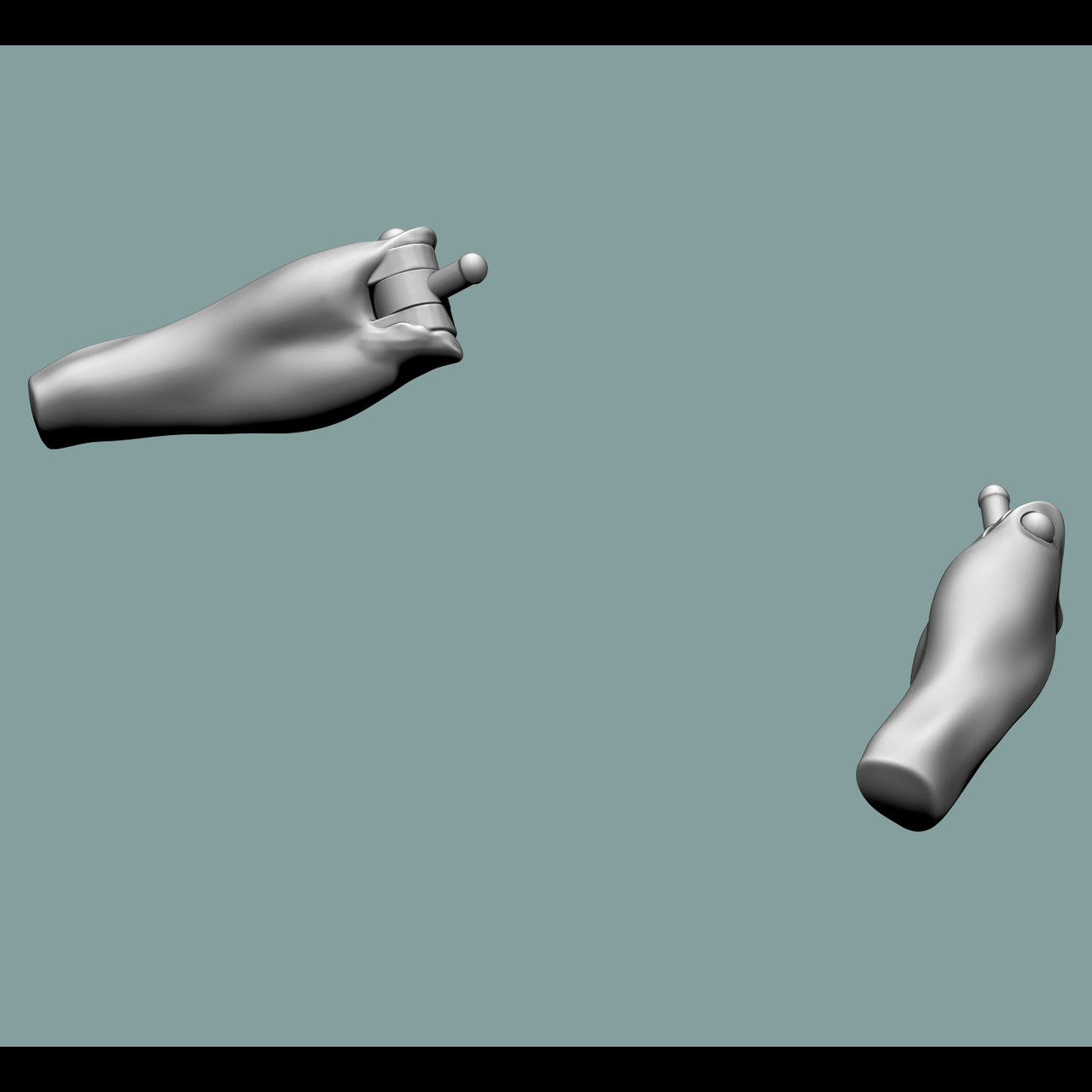 A shot of the elbow joints, I chose not to use another double hinged joint since I don't care for how they look in the arm and this character didn't require that level of articulation so single hinge it is! 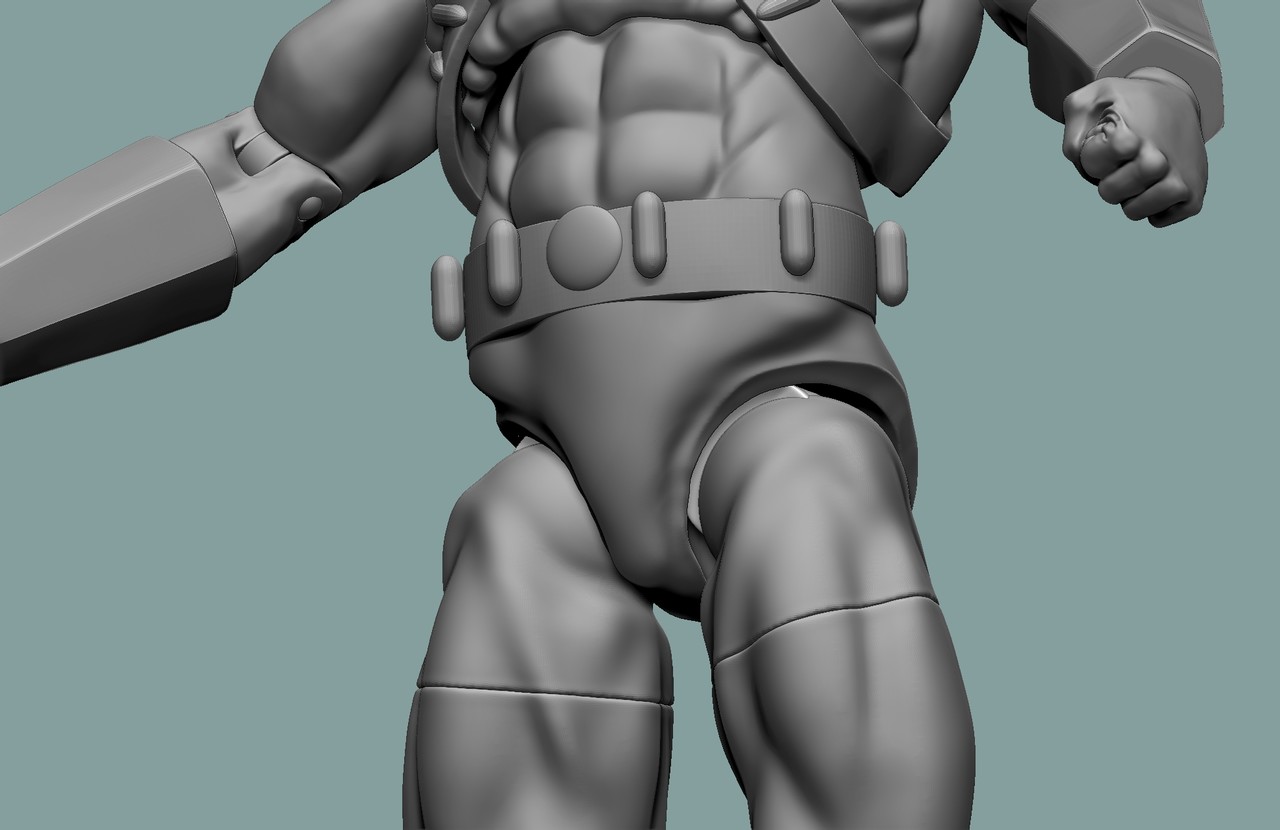 To allow the legs to fully rotate out they needed to be spread a bit further than they were. Also, gratuitous crotch shot! 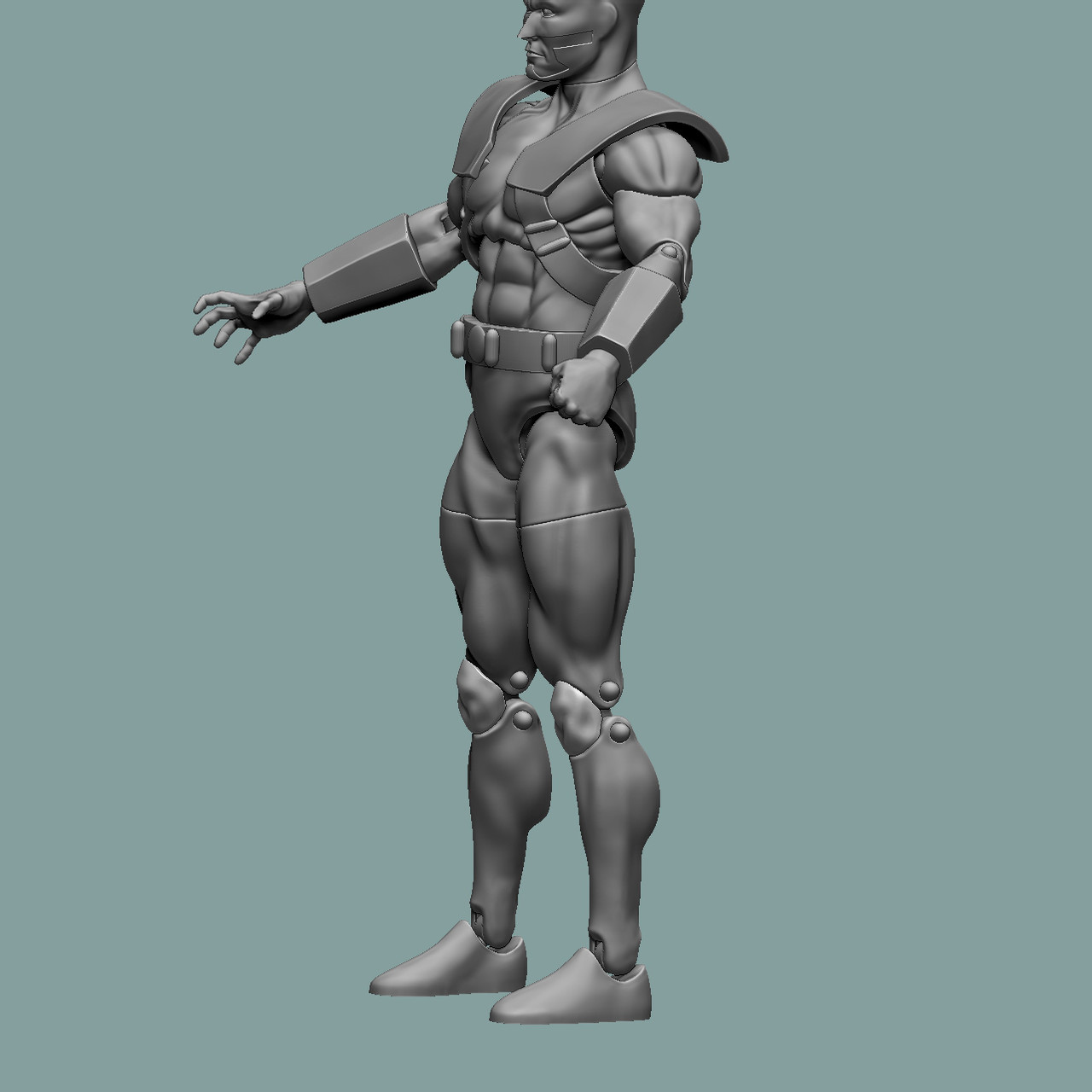 To get those funky horned things at the top of his boots to work I had to create some kneecaps, and I also added a new joint and pin in the shoulders after detailing a little more muscle separation. 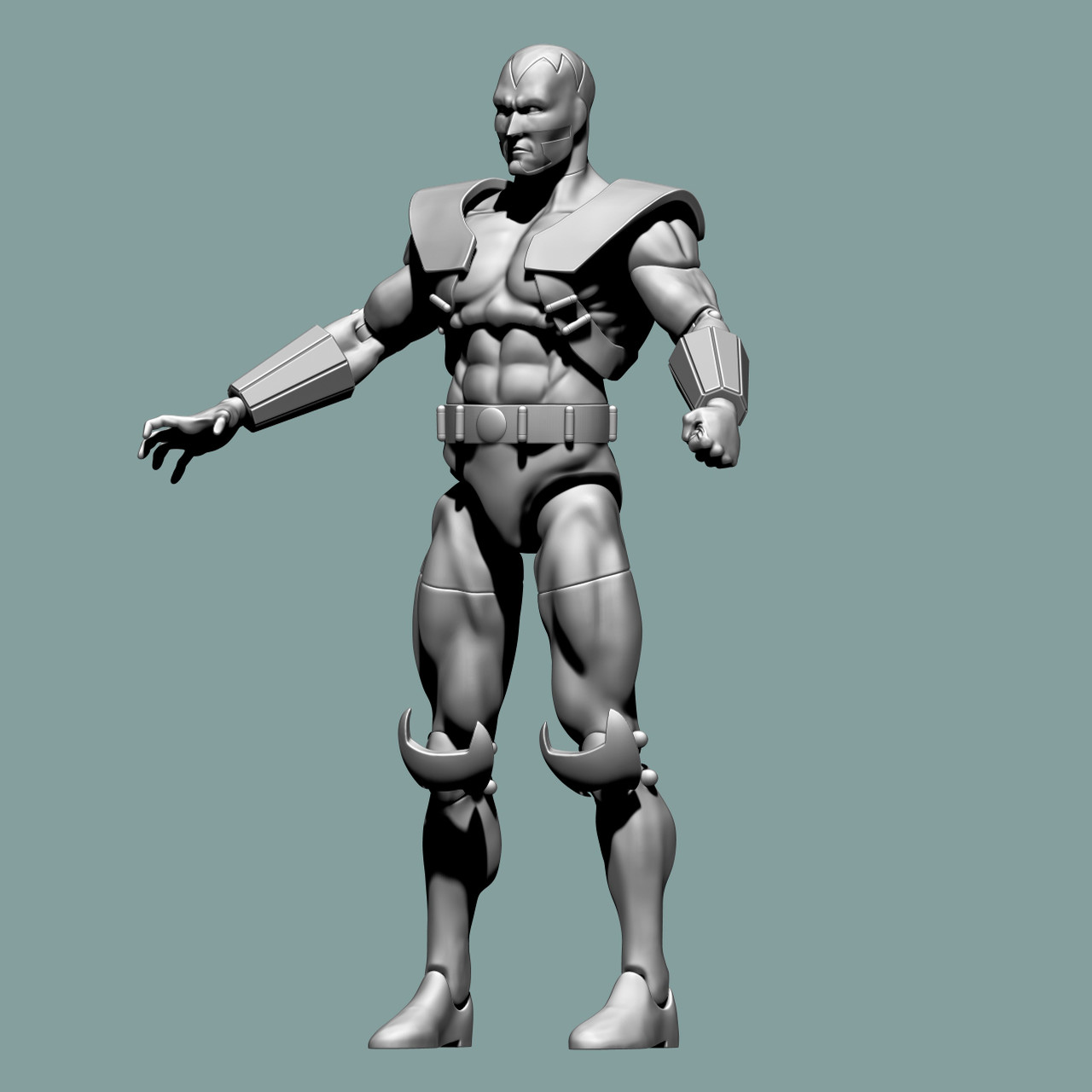 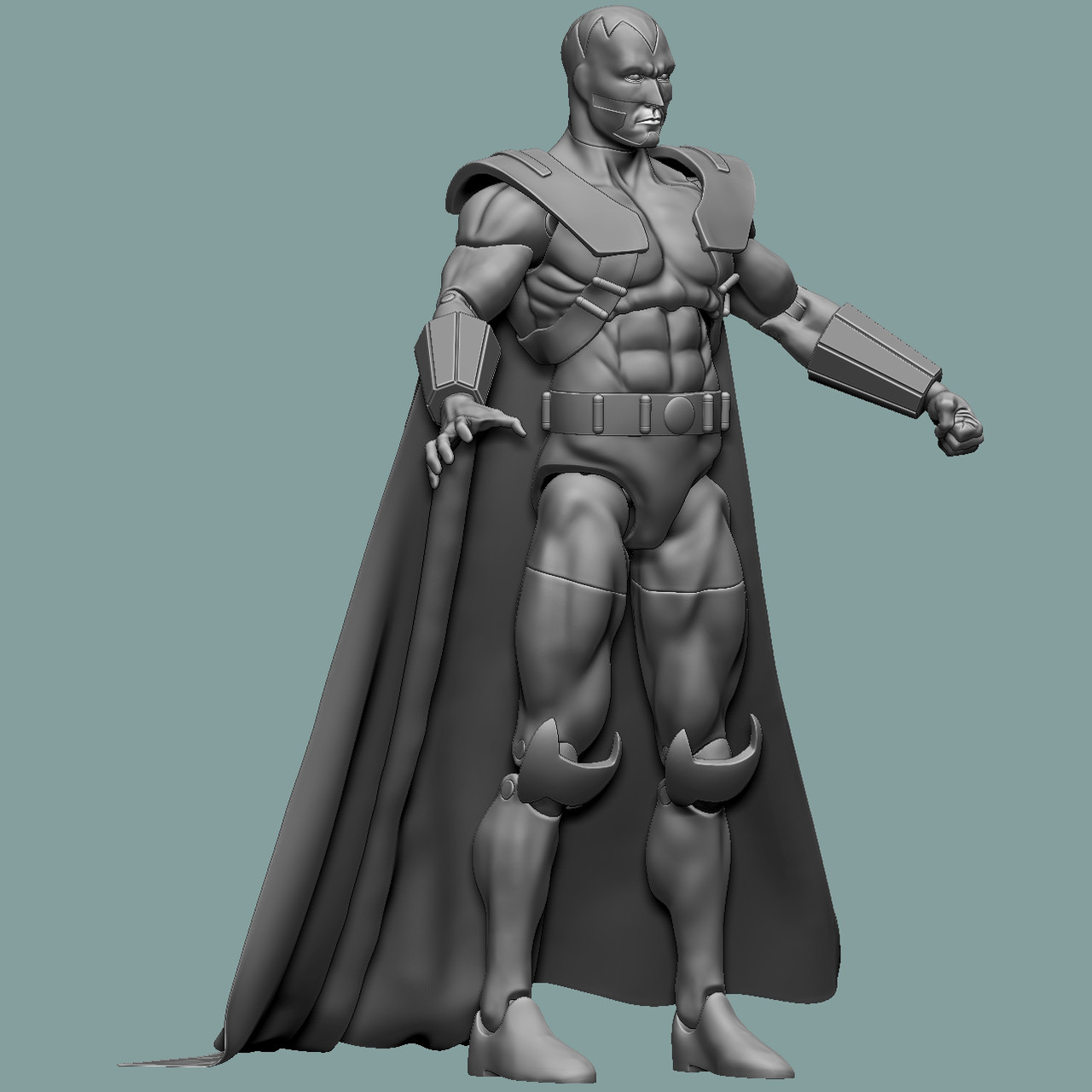 When it came time to make the cape I had a choice to make, sculpt a hard cape or use Marvelous Designer to simulate a cloth cape. I settled on a cloth cape since I want the actual toy to have a cape that flaps in the wind. 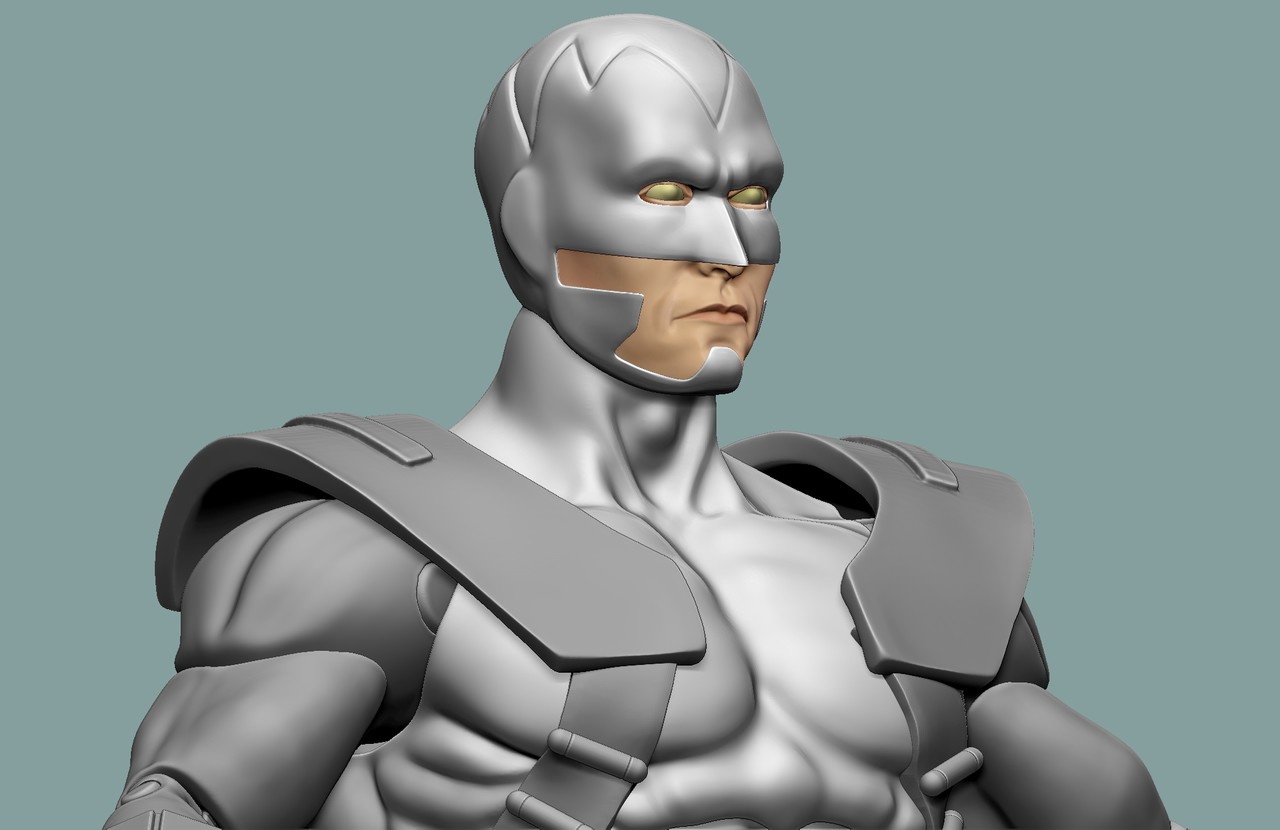 The head needed to be changed to allow full rotation and I've begun polypainting the face which was so much easier as its own subtool.

Finally here's a batch of Keyshot renders as it stands now. No textures, just a basic plastic material applied to give it that real toy feel. 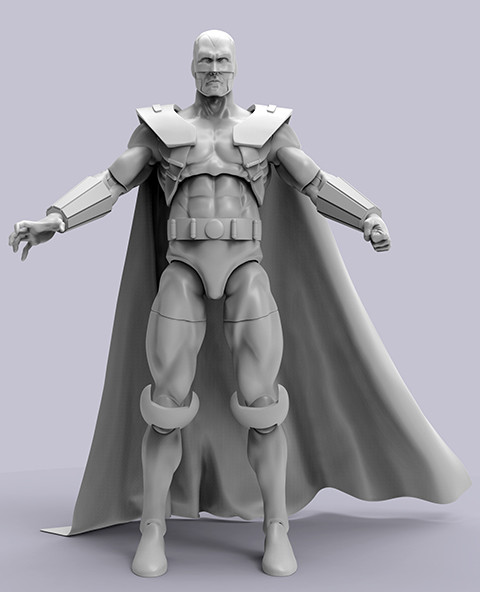 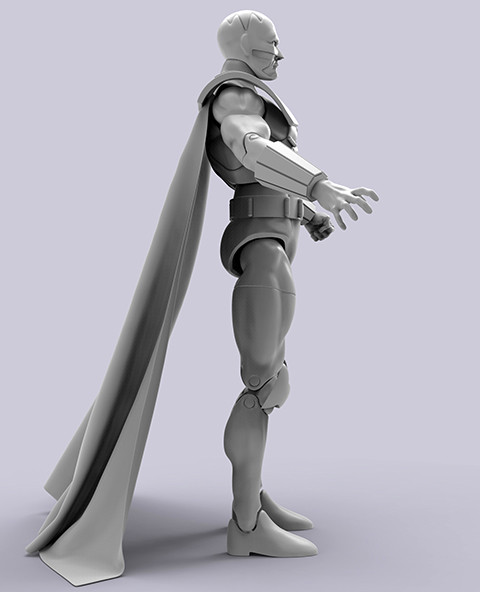 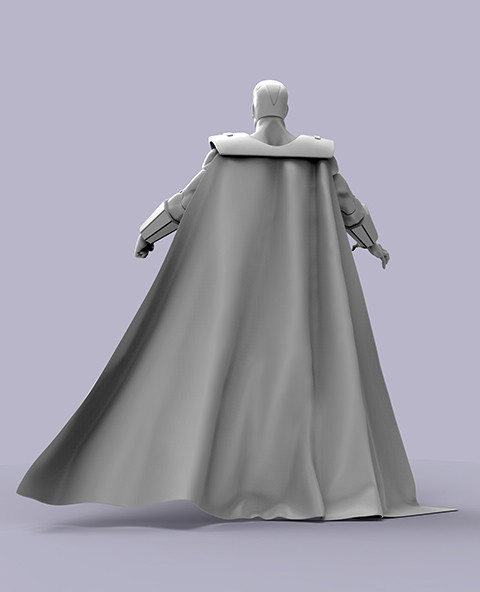 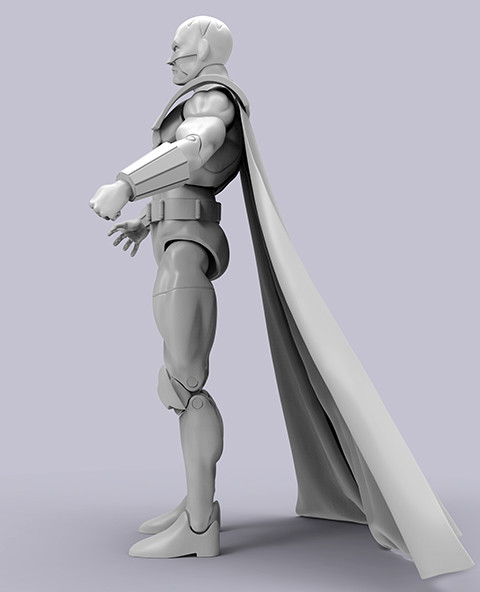 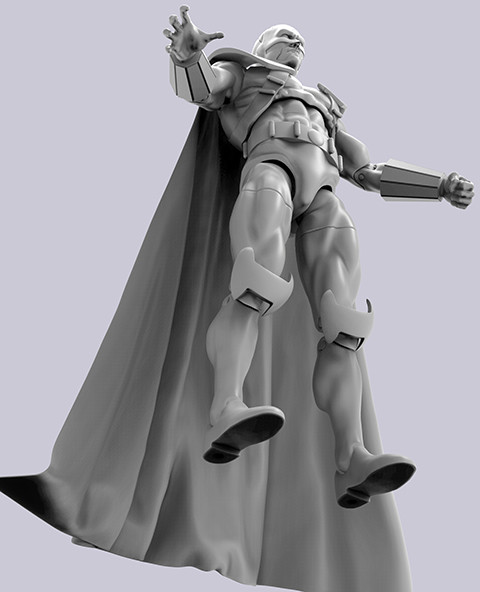 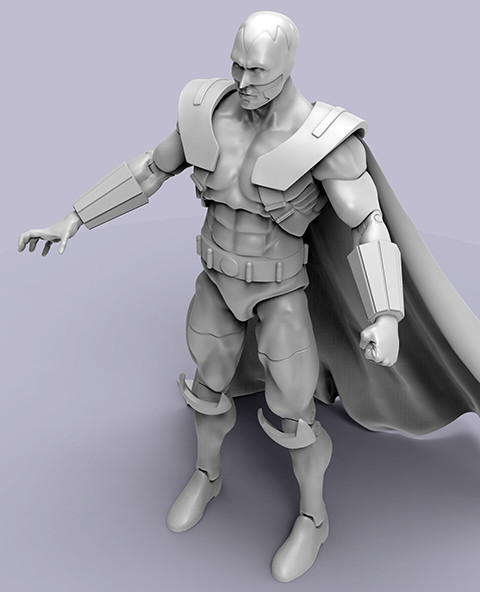 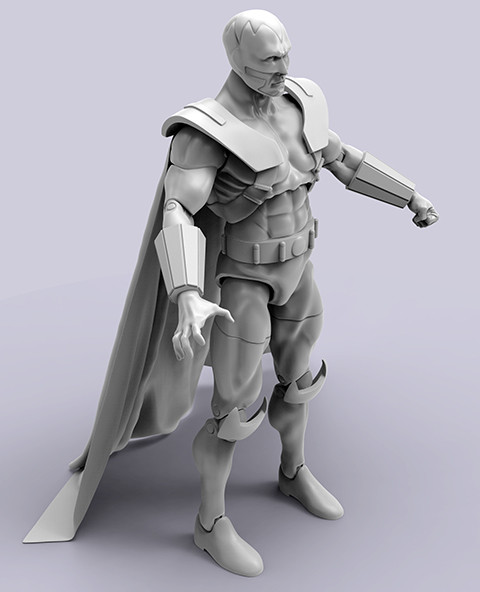 Well that's it for now, at this stage I'm going through and refining some of the details before I finish adding in anymore color. In case you were wondering, yes I have tested out the articulation to make sure no pieces bump into each other or intersect in anyway. Hope you guys like it, let me know what you think. And if there's any experienced toy builders here I would certainly love to get your thoughts/advice/critiques and if I cant apply them to The Dark Star there's several more characters on the way that I would definitely apply it to. Anyway, thanks for checking it out, have a great day!